Be the first to know — Get Outpost's monthly newsletter for news, tips and job opportunities.

They say all roads lead to Tar Valon... Take a behind-the-scenes look at how Outpost VFX's environments team built the iconic city

After a long wait for fans, 2021 saw the release of one of the most highly anticipated fantasy adaptations, The Wheel of Time. The books on which the series is based – Robert Jordan’s 1990 fantasy novels of the same name – were extremely well-received and remain one of the most popular fantasy book series to this day.

The storyline, which spans across 14 novels, a prequel and a couple of companion books, features many high concept fantasy environments which are integral to Jordan’s plot. 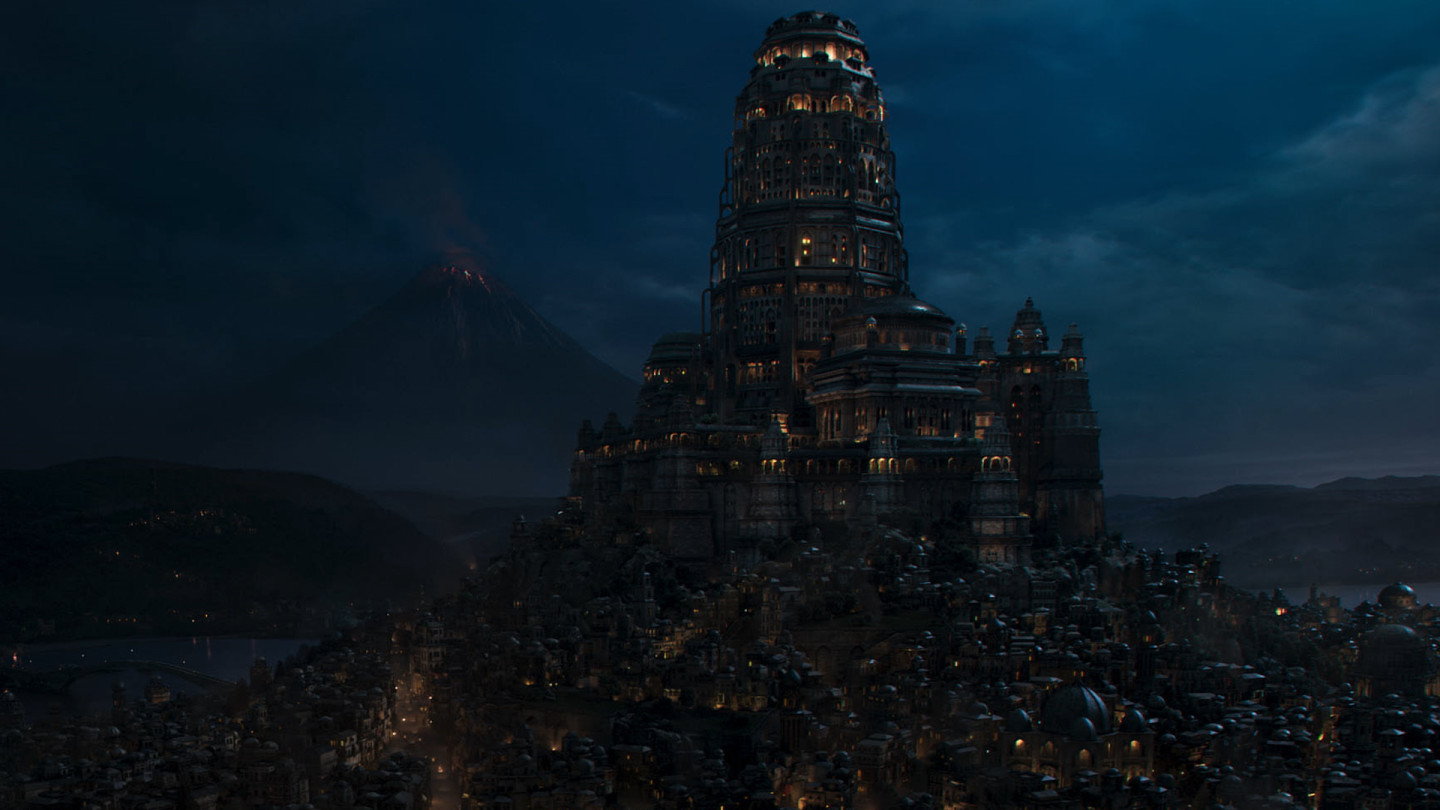 Perhaps the most distinctive of all these environments is the city of Tar Valon. A prominent and significant story point, Tar Valon is a remarkable sight; an ancient city built upon an island eight miles long and over two miles wide. The city is protected by impenetrable stone walls standing guard for the formidable White Tower, the largest structure in Robert Jordan’s fantasy world that reaches up to around 600 feet.

On either side of the island lies two harbours, North and South Harbour, and six bridges run from the city to the mainland, each one of distinctive architectural design. The island is almost entirely covered by intricately crafted buildings created by Ogier stonemasons, giving the city an identity of its own not only in Jordan’s fantasy realms, but in the real world too.

To bring this environment to life, showrunner Rafe Judkins enlisted the help of Outpost’s environments team to work alongside overall VFX Supervisor Julian Parry, VFX Producer Jakub Chilczuk and the on-location set-design teams in designing and build Jordan’s most iconic city. Together, they took their inspiration not only from Jordan’s descriptions within the books, but also various distinctive architecture from around the world.

Early client-side conceptual designs of the city showed glimpses of Eastern architectural influences, an aspect that the design team leaned into. Taking inspiration from the shape and materials of typical architectural buildings of these countries, the CG team started designing. “Our concept building assets took their visual cues from a wide range of places," VFX Supervisor, Dave Sadler-Coppard says.

"We wanted to create something that was somewhat recognisable, but also had its own identity – a place where real-life and fantasy seemed to intertwine.”

While concept art was being revised, Nick White, Outpost VFX’s Lead Generalist on the show, began working on the positioning of these buildings and other elements: “we started from the ground up,” he explains.

Using the descriptions that were woven throughout the book, the team spent many weeks perfecting a roadmap of the city, as White recalls: “in the novels, the White Tower sits centrally on the island, so this was our starting point. We then moved on to place the road systems, with the main roads, or avenues as we called them, spiralling in towards the tower.

“Once we were happy with the tower and the road positioning, we began to think about where the citizen’s houses and the hero assets would be placed, as well as where the natural elements of the scene, like rocks, trees, and park land, would go. Throughout the whole of the build, we had to balance the accuracy of the original story and good compositional choices,” continues White. 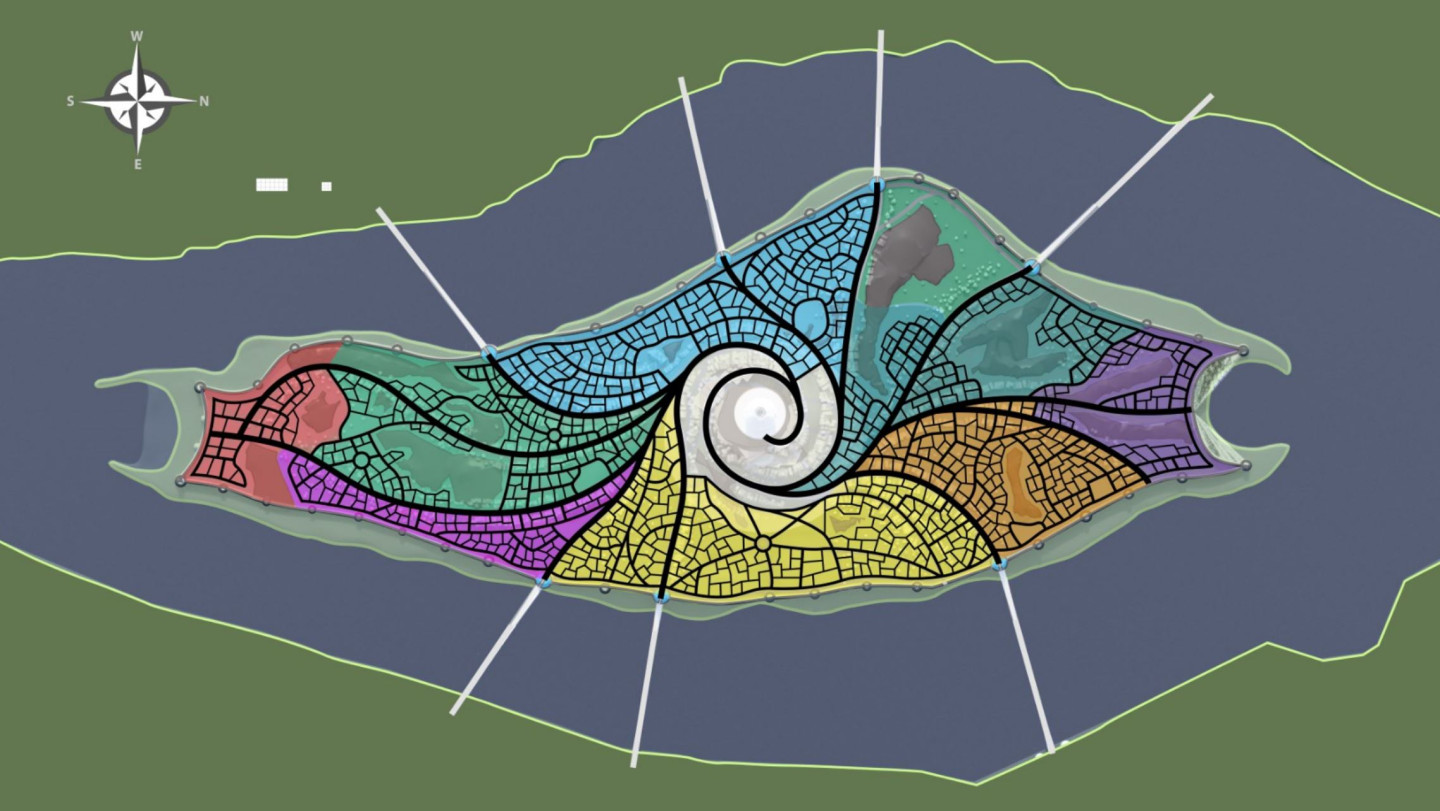 With the roadmap completed and the visual identity of the city being developed, the team began working on the CG buildings to begin populating the map.

“We worked really closely with the on-set arch-designers and set-dressers who gave us LIDAR and photogrammetry of the whole set which we then tidied up and built on top of,” recalls Roni Rodrigues, VFX Supervisor for The Wheel of Time.

Creating such a huge asset meant it was important the team worked efficiently. “We built 20 blocks of buildings which we scattered procedurally using Houdini. We wanted to get as much reuse out of the individual buildings as possible without compromising the shot, so we created a number of basic models and added variation through look-dev and texturing” CG Supervisor Ben Hart-Shea explains.

The team needed to build enough houses to hold the 600,000 residents of Tar Valon within the time constraints of the filming schedule. This led the CG team to build the residential houses in groups of four which would intersect in a way that wasn’t visible when the buildings were in situ.

Even using this process and with procedural scattering, creating a layout with the correct look and feel was a lengthy task, Hart-Shea recalls: “there were lots of iterations of the city’s layout; somehow we just knew when it didn’t look right. We built in layers, expanding vertically so we could add scale and height in places we felt needed it.”

“The challenge of this task was compounded by the sheer amount of data we were handling. We would have to render the scene overnight, which meant it was difficult for us to see the true effect of our changes until hours later,” adds White.

While the LIDAR scans provided the team with a basis for the city’s residential buildings, the hero assets were full-CG and created from scratch. These included religious temples, marketplaces, guild halls and others which were built with varying Eastern architectural flair.

“We created hero assets with domed rooftops and added dramatic arches to design of the White Tower, elements which are characteristic of Persian architecture,” Sadler-Coppard explains. 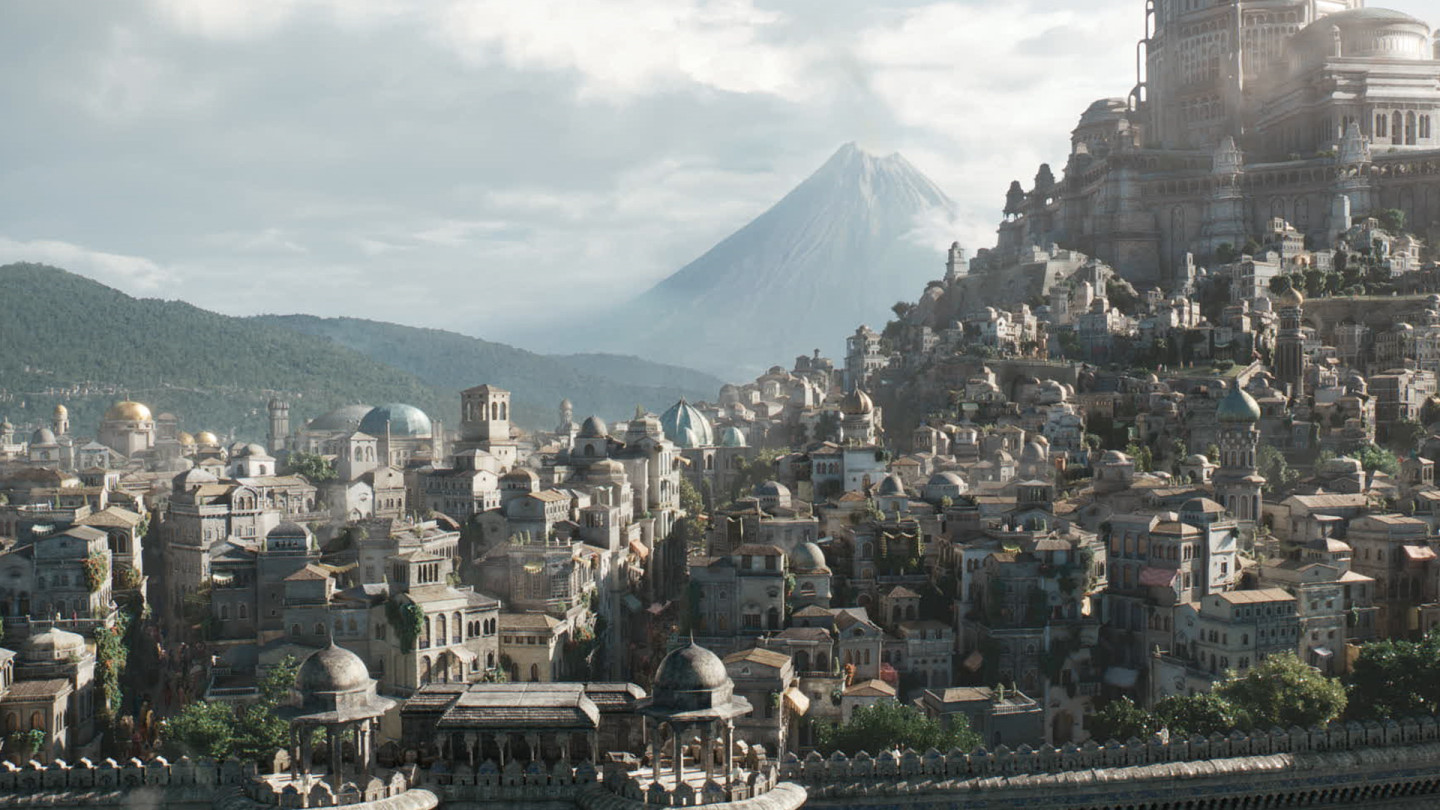 Final render of the city with Dragonmount DMP

Vatican-esque touches found on the asset façades elegantly hint towards Roman, Baroque and Gothic influence, while concrete-looking, rounded rooftops are reminiscent of the Pantheon dome in Sicily. Turkish and Croatian architectural touches can also be found in the city’s harbours and skyline, briefly giving the viewer a sense of familiarity in what is still a high-concept fantasy environment.

Prominent aspects of the city as described in the novels such as sky towers and bridges were also created with care and attention, using Jordan’s descriptions as a starting point.

For perhaps the most significant hero asset, the White Tower, the CG team used passages from the book, as well as rounded spires and the complex decorative turrets and parapets of North Indian architecture as inspiration for the build. Distinctive Indian temples such as Sasbahu Temple in Gwalior, the citadel of Jahangir Mahal in Orchha and Kandariya Mahadev Temple in Khajuraho were referenced in early conceptual drawings.

“The White Tower itself went through many, many iterations,” Sadler-Coppard says. “The first concept designs were of a tower which featured a repetitive, cylindrical and modular design, one which lent itself to fairly simplistic CG where we could create a few parts that could be replicated and built upon.

“However, a few months in and after many different designs, the final tower had a more industrial feel with complicated and separate towers that had to be hand crafted,” he continues.

With all CG assets now in place, the comp team added the finishing touches.

“We added elements like smoke, light and digi doubles to make the city more dynamic, to bring it to life,” says Outpost’s Head of 2D, Giorgio Pitino.

“We imagined what it would be like living in the city and added traces of life like smoke coming from the houses in the morning light for people be lighting a fire as they wake up, subtle things like that. It really helped us to give the city some character, and to sell the scale of the city and the White Tower, too,” he continues.

White adds: “at night, we wanted movement in the city, so we created crowds carrying lanterns. We created all buildings with windows which had object IDs, meaning we could randomly turn on lights to create a more lived-in environment.”

Through complex VFX and a great level of detail, Rafe Judkins, the visual effects, and on-set teams created a city grounded in real-world architecture, while maintaining a true sense of fantasy from Jordan’s novels. The result is a vision of Tar Valon that sparks recognition in the minds of loyal fans and offers something visually arresting for people new to the world of The Wheel of Time.

Behind the scenes of some of the extensive environment work the Outpost VFX team took on for this adaptation of Foundation.

13 Pro Tips and Tricks for Houdini

We pick the brains of our talented FX, CG and 3D artists for their best Houdini tips & tricks 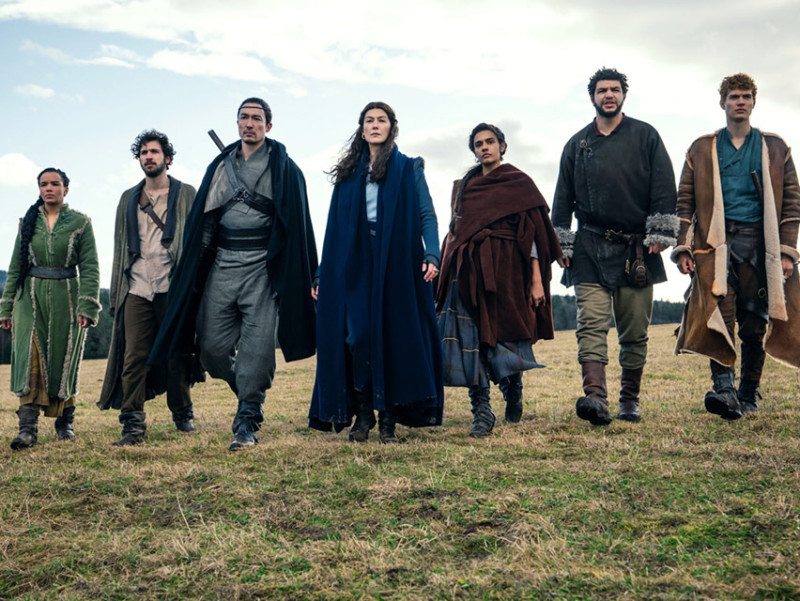 Amazon’s The Wheel of Time Trailer is Here

The Wheel of Time, one of the most eagerly awaited fantasy series, is finally set to debut in November 2021.